Youghal is renowned for it’s natural beauty, stunning walks and cycle routes along ecology areas to the historical town centre.  A large number of internationally acknowledged heritage sites and conservation areas are visible along these routes.

Approximately a 35 minute drive from Trabolgan Holiday Village, there’s plenty to see and do in the area.

Youghal is also one of the best preserved examples of a 13th century town in Europe, and as such has been designated a ‘Heritage’ Town by Failte Ireland. It was built as a town to defend and control trade on the Blackwater River which leads into the heart of Munster’s rich farmlands. Youghal’s position was critical to the maintenance of that trade, and access to the most valuable farmland in Ireland. It derives its name from the Gaelic word ‘Eochaill’, meaning ‘yew wood’, pronounced ‘Yawl’.

Perks Entertainment Centre and the Aura Leisure Centre are some of the local attractions in the area.

So go on, book your family self catering break at Trabolgan TODAY, the fun starts here! 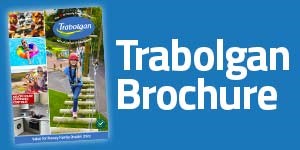